You are here: Home / About Us / Our History

Our story began in 1983 when Fred purchased one coach. The intention was to run a few mystery tours at weekends.

Have a look at a few of our milestones along the way. 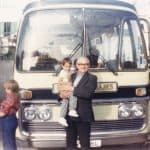 Fred purchased one coach in April (as an addition to the several tipper lorries he already owned) and ran a few mystery tours from his base in North Pool Road.

The companys first Executive Coach with onboard toilet was added to the fleet – a Jonkheere Volvo B58.

This was said to cause quite a stir with other well established local operators. 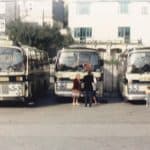 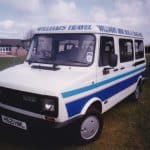 Another big step (although Fred didn’t really know it at the time) when a disabled access minibus was bought into the fleet specifically to run a contract for the Murdoch & Trevithick Centre in Redruth (this contract was quickly added to and we ran a number of contracts for them until they closed in 2017).

Shortly after this Curnow School chose Williams Travel to trial the use of a private company to provide their pupil transport. We can only deem it a success as we have an excellent working relationship with Curnow School and Cornwall Council still use us today as the schools main transport operator.

A new type of vehicle to Williams is purchased – double decker Neoplan coaches. Very popular with local bands and choirs.

The first double decker buses to be added to the fleet were purchased as a direct result of the deregulation of bus services in the previous year. 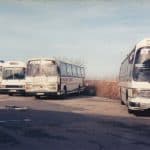 Having outgrown the latest site at the Old Forge, Roskear Fred now set his sights on owning his own yard and purchased the old Mothers Pride Bakery at Dolcoath. The site needed a substantial amount of work but it was a huge step up for both the workshop and office side of the business.

By this date (seven years after starting to trade as a coach operator) Fred Williams has increased the number of authorised operator’s licence discs to 25.

We were thrilled to welcome two brand new Mercedes coaches to our fleet. This began our Premier Class range and to celebrate we invited our regular group organisers out for an afternoon mystery tour and cream tea. The sun shone and as the Tourino and Tourismo were introduced to our clients they were all planning their next outing to include these luxury vehicles. 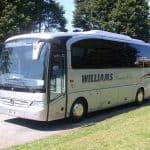 The number of authorised operator’s licence discs we have has doubled in the last ten years. It is now at a whopping 55.

This year we also felt very privileged to be invited to London to be an official transport provider for the 2012 summer Olympics. We sent 5 coaches and 14 drivers to work in London throughout the whole event.

The organisers of the Olympics were made aware that we were in the process of purchasing our first disabled access executive coach and immediately asked us to return to London the following month with 3 coaches and 7 drivers to provide transport for the 2012 Paralympics.

A mass exodus from Cornwall to London as we transported 8 coaches of Cornish Choir members to London for the Cornwall International Male Voice Choir Festival taking place at the magnificent Royal Albert Hall.
2014

This year saw an entirely new experience for us as we were successful in our application to work for the high security firm providing transport to the NATO summit in Wales. As the eyes of the world were on Wales, our team of drivers had successfully passed the high level security checks and were on site to work day and night.

Thanks again for making things so easy for me

We had a lovely day out and everyone said they thoroughly enjoyed themselves, the weather was great too. Please pass on our thanks to (the driver) for his expert driving and humour – it was great. Thanks again for making things so easy for me.

Frederick Thomas Williams t/a Williams Travel/Williams Holidays is an appointed representative of ITC Compliance Limited which is authorised and regulated by the Financial Conduct Authority (their registration number is 313486) and which is permitted to advise on and arrange general insurance contracts.